For anyone worried about what GMOs are doing to our agricultural system and how Monsanto is patenting plants across the planet, there’s another dangerous devil on the horizon.

Palm Oil Products have been around for years, but the evils of palm oil deforestation typically go unnoticed by the average consumer.

If you’ve not gotten the dirty details on palm oil problems yet, then buckle up for a bumpy ride we all need to take.

Because the palm oil industry is not only endangering once-pristine places such as Palawan, Philippines (which was named the Best Island in the World by Conde Nast Traveler readers multiple times), but the health of our entire planet.

Here we’ll take a look at the destructive nature of palm oil deforestation, its impact on climate change, the problems with sustainable palm oil, and some potential solutions to these issues.

READ MORE: The 15 Best Things to Do in Coron, Palawan (Philippines) 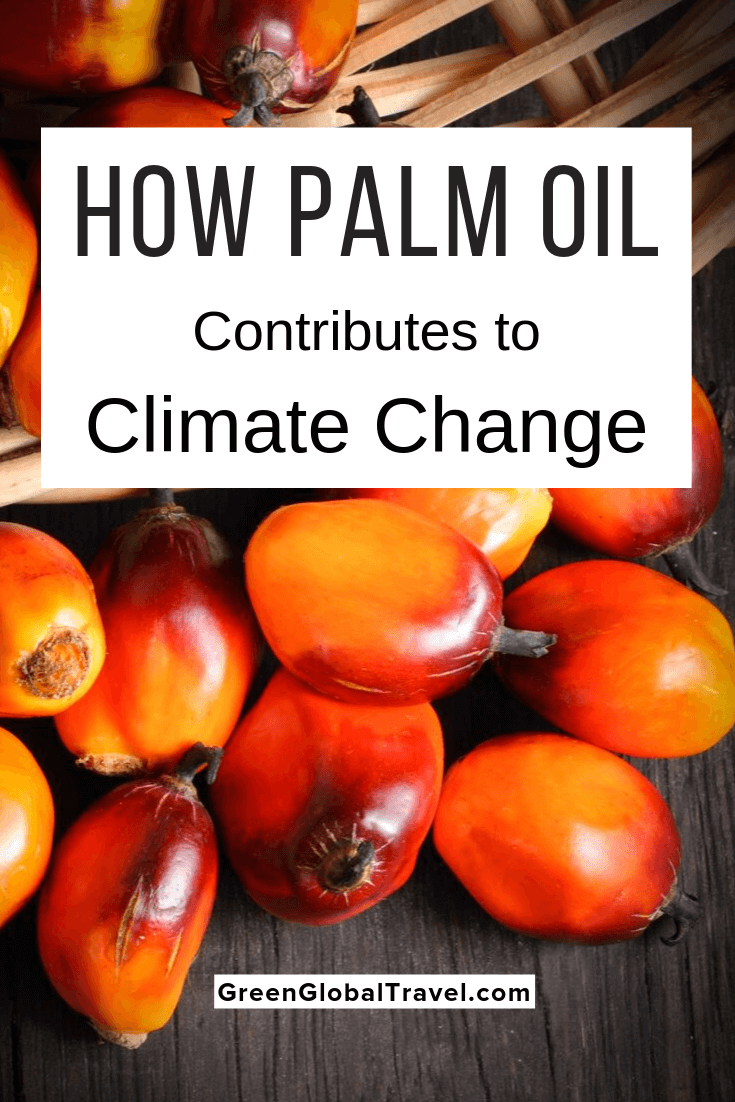 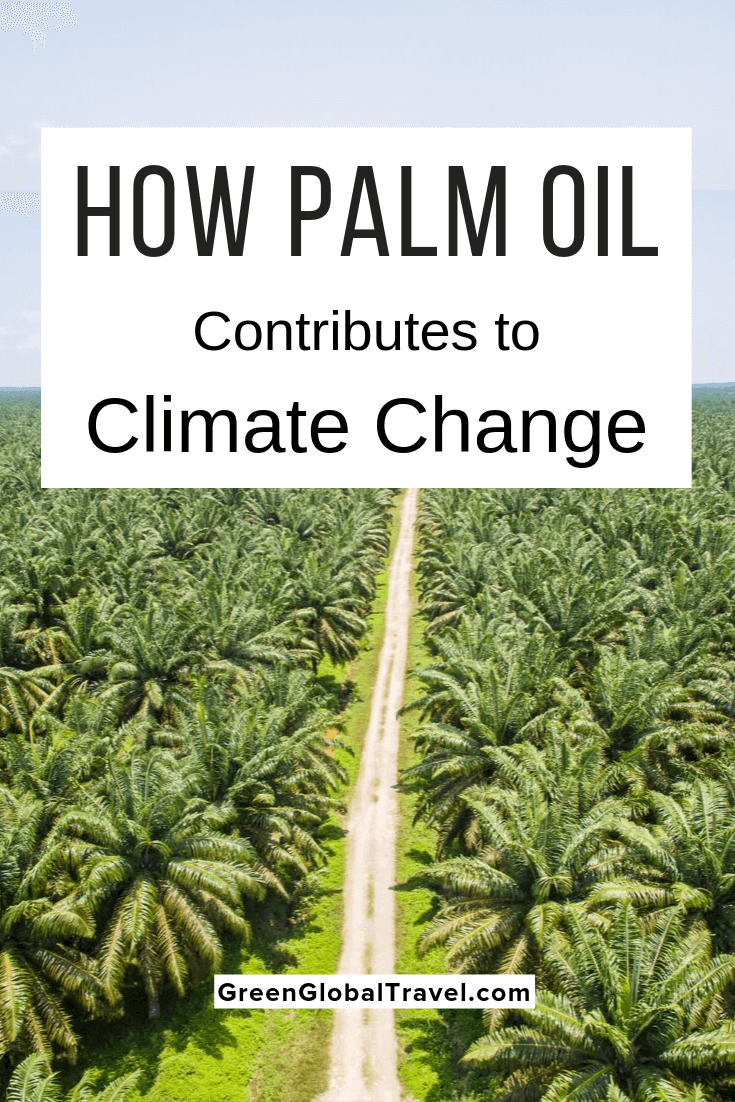 Like GMO corn and soy, palm oil is produced on a massive scale of an estimated 50 million tons a year (about 30% of all vegetable oil), and has oozed its way into almost everything we use.

Roughly half of all household items in the US are products that contain palm oil, from shampoo and cleaning solutions to food.

In other words, if palm oil processing promotes deforestation, which is one of the causes of climate change, then we as a society have a major problem on our hands.

Palm oil comes from oil palms, a tree native to West Africa, but which thrives in any hot, wet tropical climate. Nowadays, the trees are grown in Asia, Africa, and the Americas, but over three-quarters of the planet’s palm oil comes from Indonesia and Malaysia.

While these countries are small compared to some of the major world powers, the negative palm oil effects are immense.

Palm Oil deforestation is have a devastating effect on the rainforests. Because many of these biodiverse ecosystems are not protected (or not protected well), they’re increasingly falling prey to palm oil companies.

As a result, there is massive rainforest deforestation, many of the planet’s most unique animals are being put on critical watch lists, and indigenous populations are being displaced and exploited.

READ MORE: How to Avoid Products With Palm Oil

According to WWF, palm oil plantations have caused the loss of over 8 million acres of vital forest in Indonesia, Borneo and Papua New Guinea in the last 20 years alone.

Not only is this a horrible detriment to the natural world, but the planetary damage continues in the escalation of climate change and global warming gasses that are expelled during the slash-and-burn deforestation process.

This means a huge loss of oxygen provided by those trees and other plant life, which is then replaced by the carbon they’ve been storing in the form of smoke.

Of course, that doesn’t even address what this habitat destruction means to the animals who live in those rainforests.

Many of us have seen heart-wrenching photos of orangutans injured by palm oil deforestation. But let’s not forget the other endangered species we’re losing, including Javan rhinos, Sumatran tigers, Sun Bears, Clouded Leopards and Sumatran elephants.

When a rainforest is slashed and burned, these animals are left without habitat or food, and often become victims of poachers or farmers trying to protect their crops. Some of these species are now projected to be extinct within a decade.

If losing precious wildlife species isn’t enough to cause concern, then how about people? Palm oil plantations are ruining the forest in which many indigenous cultures have lived for centuries.

In the process, they’re depriving these people of the food sources upon which they’ve historically relied. Some people have been forcibly removed from their homes to make way for palm oil plantations. Others, left without options, become plantation workers.

To add insult to injury, according to Rainforest Rescue, the land of those who live near palm oil plantations suffers from soil and water pollution and is left unprotected by the destruction of forests, which are instrumental in preventing mudslides and floods.

Since the press has caught wind of what’s going on with palm oil, efforts are being made to subdue people’s concern.

Major companies have taken to using comforting buzzwords like “sustainable palm oil”  and “organic palm oil” on their product lists, if they even use the term palm oil at all (it’s often listed simply as vegetable oil).

Whatever their intentions, the fact of the matter is that sustainable palm oil production just isn’t happening.

The RSPO (Roundtable on Sustainable Palm Oil), which awards responsibly managed companies with the “certified sustainable” label, seems to have taken a cue from the organic food industry and learned to cut corners, reportedly giving certification to unworthy sources.

The snail’s pace of affecting truly sustainable change is allowing for more and more of the same old, same old to continue. And once an old-growth forest is felled, it takes 100 years for it be replaced.

One big reason for the continued increase in unsustainable palm oil processing is consumer apathy. With customers seemingly unwilling to give up their favorite snacks, companies are in no real hurry to alter production methods.

Unfortunately, most consumers of these products are likely unaware (or misinformed) about the devastating consequences that come along with palm oil production.

Deforestation in the Philippines

Despite this abundance of troubling information, the demand for palm oil products continue to defy logic, with the industry expecting to continue growing exponentially in the next decade.

It’s already the most widely produced vegetable oil in the world, and its inclusion on the ingredient list for candy bars, soap, biofuel, lipstick, and more products seems to be growing.

The Palawan Man & Biosphere Reserve is now effectively under siege. Over 6,000 hectares of protected land have already been cleared, with plans for 20,000 more to ultimately fall in the name of industry.

This has already caused massive destruction of the Philippines’ “Last Frontier,” endangering the biodiversity, water sources and soil quality.

It’s also hindering the locals’ ability to feed themselves. These palm oil plantations aren’t even allowing them to intercrop their own annexed land with local food staples like cassava.

The horrible fact is that these palm oil plantations should never have existed in the first place. The whole province was declared a UNESCO Biosphere Reserve in the 1980s.

Now animals are disappearing, and bird population numbers dropping. The palm oil plantations are breaking up the forests, preventing safe and natural passage through them and seriously challenging the interrelated ecosystems.

As animals and plants are forced out of their ecological niches, they strain the flora and fauna populations of the remaining jungles.

This onslaught of nasty news has undoubtedly got your upper lip twitching, and you’re likely itching to do something about it. Fortunately, you can participate in deforestation solutions.

It’s important to remember that our choices in supermarkets across the world mean something to the lives of the people, the animals and the forests suffering at the whims of our consumer demands.

Hence, we must demand better. Here are three things you can do to make a difference:

Look for petitions to stop the palm oil rush, particularly in Asia. As with GMOs, there are numerous petitions for requiring companies to include honest labeling of products with palm oil.

It takes just two minutes to add your name, and it may help to save the livelihoods of thousands of people as well as the lives of millions of plants and animals. Sign them, and share them.

Also, don’t be afraid to use your voice by contacting companies whose products you use and telling them your stance against palm oil!

2) Speak with Your Money

Maybe some pessimism is appropriate here. Maybe these companies and corrupt politicians don’t listen to petitions, protests, and peace-loving hippies.

But they damn sure listen to dollars, which is why we’re starting to see companies like Nestle, Unilever, and Kellogg’s scramble for at least the appearance of a solution.

Boycott palm oil or, if that proves too difficult (since, like GMO corn and soy, it’s hidden in products all over the supermarket), work on lessening your usage.

Buy products that are at least going the sustainable route, trying to keep concerned customers happy. An unsightly change in profits will definitely bend the ears of corporate bigwigs!

We’re all guilty of sharing silly memes on the Internet, be it via Facebook, Twitter, or Instagram. You don’t necessarily need to stop, but why not seek some sort of balance by sharing something important as well?

If you care about Orangutans, rainforests, and the indigenous people who inhabit them, then your friends and family are more likely to care as well.

You can share this article (and thanks in advance if you do), but don’t forget to let folks know where they can sign that petition or why you aren’t buying such-and-such anymore.

After all, it’s our ability to share information at the grassroots level that prevents the ignorance fostered by corporate-owned mainstream media sources. Sometimes, without realizing it, we color the way our family and friends think.

In addition to being a wealth of information on this important subject, the following websites offer other palm oil facts and ways to involve yourself, such as donating and volunteering:

We’ve spent decades (not) watching the palm oil industry and ignoring as lackadaisical government policies destroyed rainforests around the world. Now that we are in the know, it’s time to let them see that we do care.  –by Jonathon Engels. Main image of a Palm oil plantation in Palawan, Philippines. Photograph by Jason Houston for USAID via public domain